Dellacoma Behind The Scenes: Notes From the Road

Dellacoma Behind The Scenes: Notes From the Road

by Robin Ervolina
The last time I holed up with the dudes of Dellacoma, I spent the better part of two days watching them sweat out three fresh tunes at Dark Horse Studios in Nashville, TN. This time I’m holed up in a van full of suitcases, gear, and merch. As the one NOT expected to be rested and in top form, I relegate myself to the small shit seat next to the door. Jason has the grand suite aka the back bench and Tommy has managed to create a junior suite by stacking things in the gap between seats.
Jarrod turns around from the shotgun position and asks me to find his guitar. Guitars are easy. They’re always on top. If he’d asked for a pen, or deodorant, we would have to pull over and dig. I pass it along and he says “Might as well write a song.” It’s here I realize while I was busy in my makeshift office (the amp is my desk and a suitcase serves as a filing cabinet), Dellacoma has been creating behind the wheel. I close my laptop to take it all in, but within a few minutes the sounds of strumming and singing have fused with the rubber on the road, and I’m lulled to sleep.

Somewhere on the way from somewhere else, I wake up somewhere new. If I’m being honest, I don’t remember where, and it doesn’t matter. It’s the same process almost without exception. After hours and hours of driving, taking minimal breaks for gas and rest stop food, we arrive smelling awful and looking like hell. We jump out of the van and unload because there is no room for a sixth person to tech for the band. Sometimes the venue has a person there to help, sometimes they don’t. Sometimes a certain merch girl/photojournalist falls out of the van trying to unload, and barely escapes a face plant because her frontman has cat-like reflexes. Regardless, in the cold and sometimes in the rain, we haul until it’s all inside. I set up the merch during sound check. Jarrod has the worst task as setting up his kit takes the most time. If I hurry though, I get all situated before sound check. It’s the only time I can watch them sans distraction. Those are my favorite times.
And that’s just the way it goes. Sometimes we get food. Sometimes we get to check in to our rooms (or houses of friends) and take showers, maybe even naps. Usually it’s more like, sit in the van, drive the van, bust some ass, and rest a bit before doing it again. But there are distinct highlights from this tour.

Pineapple Jacks in Rochester, NY treat the band (and me by proxy) with absolute VIPness. The staff is completely attentive, and there’s an actual green room with a buffet. In between load in and show time, we’re chauffeured to a Rochester treasure, The House of Guitars, where Dellacoma plays a three-song acoustic set. I watch Jasin move through the guitar-lined corridors in a trance-like state; it’s like watching God humbly meet His maker. We move back to the record-portion of this massive store past photos of names I won’t drop, but they’ve all come through this legendary location for gear. Beyond that, Dellacoma is asked to sign the Wall of Rockstar Autographs, and pose with owner Armand Schaubroeck for a photo to hang alongside the others. As if that weren’t enough, he brings us all back to a corner where decades of shirts and hoodies in every style sit piled up on shelves and in boxes. He begs we all choose one; he says it’s his honor.

Dellacoma at House of Guitars 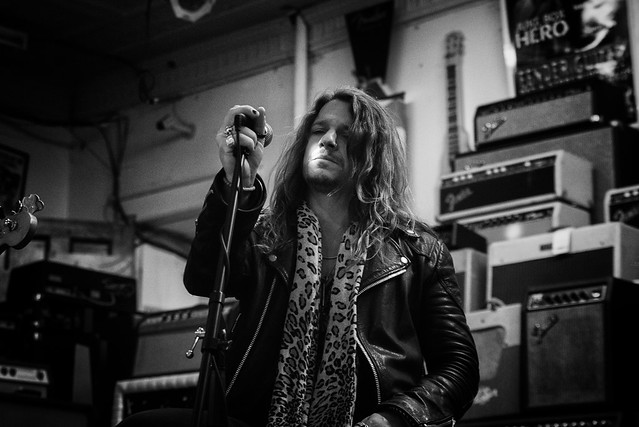 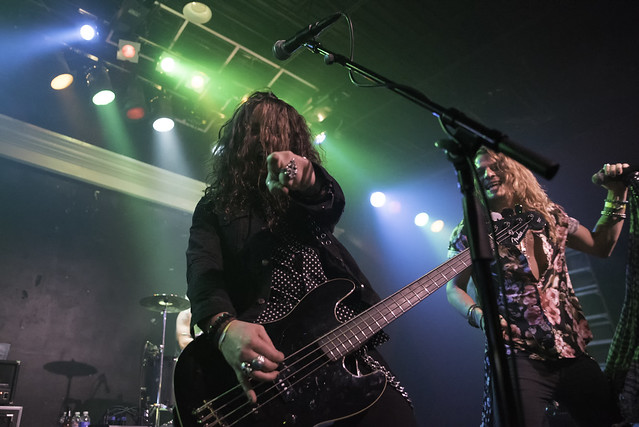 Wisconsin used to be, for me, just the land of beer and cheese, but two venues changed that. I’ll forever recall being witness to Dellcoma’s first sold-out headlining show at Lucky Chance in West Allis, after performing to a rabidly loyal fan base the night before at Phat Headz in Green Bay. Both crowds danced and sang along enthusiastically, even catching on to the chorus of Dellacoma’s new songs not even pressed yet. From standout opening acts at Evening Star in Niagara Falls, NY, to great barbecue and co-acts at The Looney Bin, each stop of the tour brought new surprises and treats. 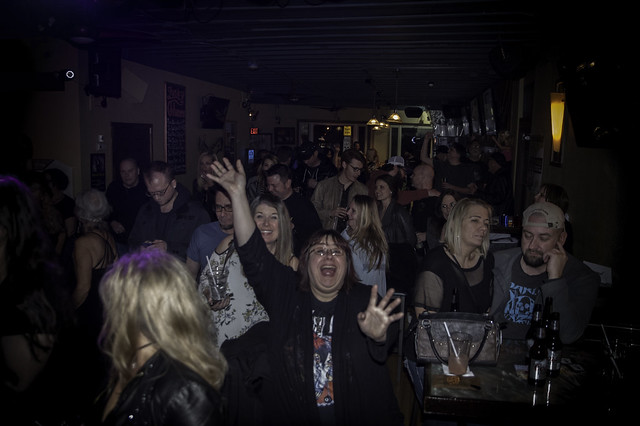 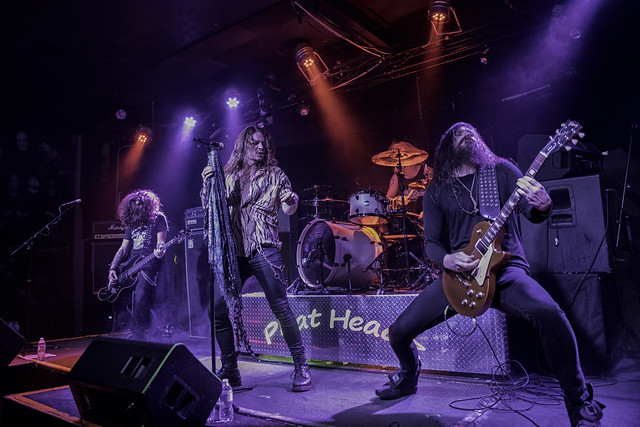 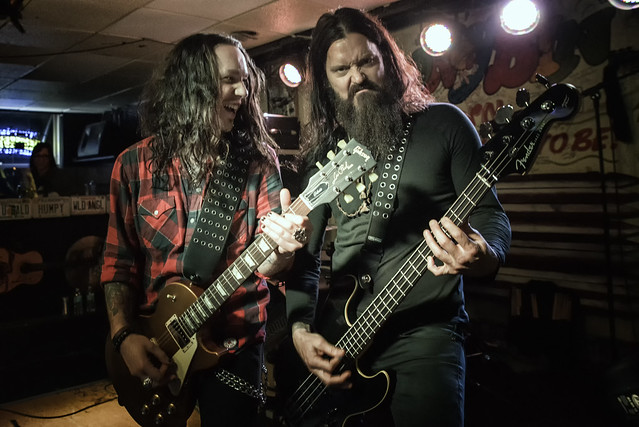 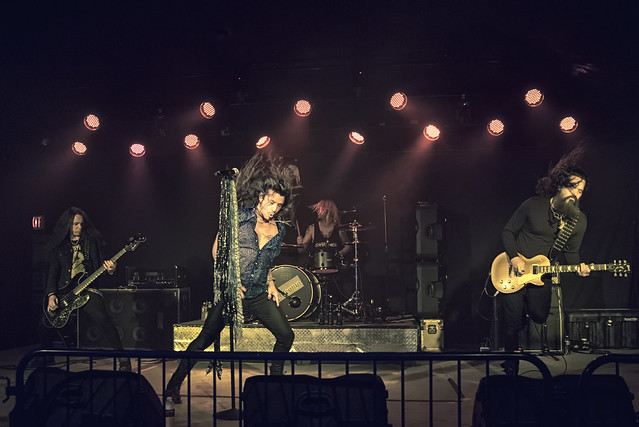 Then there’s Topeka, KS. Thanks to the amazing John Hennis, we are completely coddled so much needed rest comes easy. We arrive so late, but he meets us in the driveway and escorts us to his basement which is the coolest home bar imaginable. The walls are lined with guitars, photos, and assorted memorabilia from decades of great rock. He fixes drinks, we chat, and finally we sleep … so so well. The next day they perform at The Legendary Boobie Trap, and John has let us all take part in a special event. During “My Kind of Woman,” Dell calls John on stage and presents him with the guitar Jasin has been playing. I grin to myself as I’ve watch Jasin hold the guitar tightly to his core, careful not to go into any signature move that might accidentally reveal the words “Marry me?” that John has written on the back. Spoiler alert: She said yes.
When the bar closes, we go back to John’s, but the bar crowd comes with us. We drink and sing until morning. A few hours rest and it’s back in the van for a 12 hour drive to Nashville. I’ll fly home the next morning, and the dudes will head back to Australia. 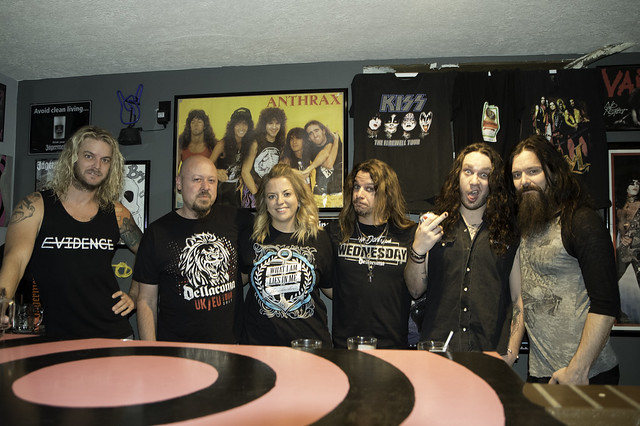 Personal memories aside, here’s what I need to say about touring with Dellacoma. This is a great group of guys, but what I lived backstage pales in comparison to what you can experience at their show. If you want to know who Jasin really is, you don’t need to know that his play list is eclectic or that he has a supernatural ability to hear things in songs no one would notice. If you want to know Jasin, watch him play. Watch him melt his guitar into his being and lose himself in the creating of sound. If you want to know Tommy, you don’t need to know that he can sleep anywhere, and that he only picks on people he loves. If you want to know Tommy, wait for him to smile (it won’t take long) and watch his soul beam out through his eyes. Better yet, listen for him to laugh. He is so warm it melts his cool façade. To know Jarrod, you don’t need to know that after a long day when everyone is drinking, Jarrod slides to the floor with a guitar and offers his drumming hands to a gentle melody. You may not know his Linus-like focus when he plays piano, but you can see the genius inside when he’s on stage punishing the skins.
And Dellacoma himself? There’s no behind the scenes Dell. The person I’ve come to know off stage is the one I’ve known as a frontman for years. The passion he brings to his performance exists in everything he does. When he’s driving his own van, he’s also writing songs, or planning travel itineraries, or designing new merch. His mind is as unleashed at rest as his body is on stage. The smile you see in every meet and greet photo is the same one he cracks when someone tells a joke or he’s entertaining friends with stories from his life. While he is a performer, he’s not putting on a performance. There is no separation between Dell’s public persona; when he lets his hair down, he’s still the same guy … just maybe minus the eyeliner.

And So I’ve said all that to say this …

I spent ten days in a van with four guys so I could sling merch and take photos. I gave up ten days of my life to find out what it would be like to go on tour, and to take some of the burden off an old, dear friend. I made three more friends in the process because these are good men. These are hardworking, stupidly talented musicians who are out on the road, away from their families and friends, just to bring you music. I want you to go listen. I want you to buy a t-shirt or two, because I’ve literally seen your ten dollars go into their mouths the next day, and sometimes that’s all they’ll have time to eat. I want you to go see them and tell them thank you. You’ve know idea how much the words “thank you” can feed a person the most. Mostly, I want to make sure you don’t miss out on the second leg of this tour, and miss seeing them in general. Come out to hear the new songs, come out to sing along to the ones you know. Whatever the reason, come out. You don’t need to know them personally in order to appreciate the show. You’ll have an entire set to get to know them, and in the end, rest assured, you will know them. And to know them, I can personally attest, is to love them. Sure, I may be biased, but you’ll never know until you see for yourself. Check out the new tour dates below.