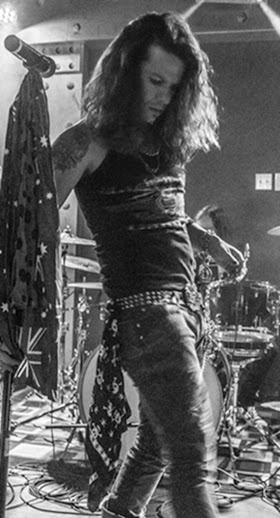 Interview with singer Dellacoma Rio of Dellacoma / The Outback Rednecks

Quick Facts:
Name: Dellacoma Rio
Birth date: 14 April
Place of birth: Seattle USA (although I grew up in Australia)
Favorite album of all time? “Pump” by Aerosmith
What is the first CD or LP you ever bought? Probably “Yourself or Someone Like You” by Matchbox Twenty
A guitar: My favourite guitar would definitely be a Gibson Les Paul or Hummingbird acoustic
Favorite musician: That’s a toughie! Either Chris Cornell or Steven Tyler
Favorite band or group: Aerosmith
As you describe yourself ? Loud!!
What are your most recently completed projects and what are you currently working on?  Currently just finished recording the first album with my new band “Dellacoma”. Also on our final USA tour of this year.
Almost everyone has a song that is special, you would like to reveal what is your song special and why?  Probably either “Be Yourself” by Audioslave or “Simple Man” by Lynyrd Skynyrd. Both are such powerful songs lyrically as well as musically.
Who were the bands or musicians who had the greatest influence on you? Led Zeppelin, Aerosmith, Bee Gees, Chicago, Journey, Bon Jovi, Shinedown, Alter Bridge, My Chemical Romance, Soundgarden, Stone Temple Pilots, Matchbox Twenty…the list could go on!
Who has been your vocal influences throughout your career?  There’s been alot but the major ones would be Chris Cornell, Steven Tyler, Steve Perry, Jon Bon Jovi and Rob Thomas.
You have musical influences of hard rock bands of the 80s?  Definitely. I wouldn’t consider myself ‘throwback’ at all but I do love the whole spectacle of the ’80’s.
Let’s talk about the new album… It’s gonna be rough, raw and in your face from start to finish. We wrote most of the songs on the road and I think you can hear that organic creation within them.
What is next for “Dellacoma” or “The Outback Rednecks”, or tours?  “Dellacoma” is currently on our final USA tour of the year which wraps up in early November. After that I fly home to Australia for a couple months while the album artwork and post production wraps up. Following that will be the album release early next year and a tour to support it!
To end the interview, a phrase you want to leave…. Be yourself, never give up.
Source: http://backtothehardrock.blogspot.com
INDIE BAND OF THE WEEK: DELLACOMA →